Hey everyone! Guess what? As mentioned before, thanks to these auctions and to donations, I am *very close* to having the full amount I need to cover my eye surgeries and medical expenses!! As Deadpool would say, "Well, blow my mind!" I am just so amazed and touched that so many people have come forward to help me in this difficult time that I barely know what to say. Except of course, for thank you; and that this is fantastic and amazing and, and, and -- I don't even know. WONDERFUL!!! STELLAR!!!! WOOHOO!!!!! :D

However, as I also mentioned, I have just one more bill that needs covering, so this final auction piece is being offered to close out the auction and hopefully take care of that as well. Not only is it an awesome item, but it seems somehow fitting to end with this, given its provenance.

And now, without further ado...

You might remember comic book artist John K. Snyder III from the wonderful Sandman sketch he donated for the last round of auctions.

Of course, you might also recognize his work from Green Lantern or Dr. Mid-nite, or recent comic book pieces such as IDW's A-Team comic covers, or possibly some of Dynamite's Zorro covers. He's also currently doing covers for IDW's Infestation and is working on the graphic adaptation of Harlan Ellison's Phoenix Without Ashes.

Well, guess what else he's just been working on? An original sketch of DC Comics' Black Canary, which he's now offering as the final fantastic auction piece to close out this amazing charity effort! Why Black Canary? Well, because she's awesome! Of course, it may also perhaps be because last Halloween, I happened to tell John that I was going to dress up as Black Canary, and John happened to think Black Canary would be a pretty neat thing to draw for the auctions. :) And so now, we have this piece - inspired by my Halloween couture this past October: 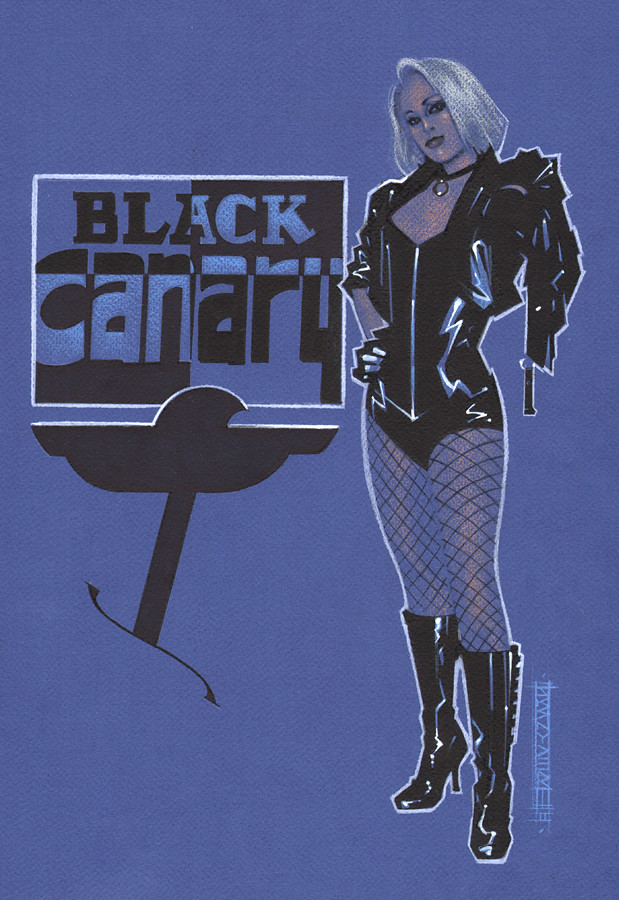 - The sketch is Prismacolor pencil on Canson paper, and measures roughly 10.5" x 16".

So you may have noticed that the dedicated and wonderful

doctoraicha had posted a few days ago asking people to hold off on posting new items for a bit. The reason for this is that, as I am ECSTATIC to report, thanks to both the most recent auctions and some very generous donations, we have ALMOST REACHED THE ESTIMATED TOTAL COST OF MY SURGERIES AND RELATED MEDICAL EXPENSES!!!!! It's completely and utterly amazing!! I don't even know how to process it! Really!! I am kind of in shock, but SOOOOO happy and VERY touched. EVERYONE, YOU ARE AWESOME.

I do, in fact, have one bill that still needs to be covered (it *just* came in, despite the fact that it was from my very first consultation at the Wilmer Institute, as it had to be processed by insurance even though they (as expected) didn't cover it). BUT I also have one auction item that has been offered to me, that *may* raise about enough to cover that cost. And since I don't want to take anyone's money once the medical expenses have been covered, I figured I'd see if we could try wrapping up the auction with this one last piece, which is to be another original work by a comic book artist. :) I think or hope that it will raise enough to just about cover this final bill and the remainder of any expenses.

Therefore, please STAY TUNED for this (possibly) last item, and also for a medical update fairly soon if you're interested in what the results of the doctor's appointment I will be having this coming Monday will be. This will be a 3-month checkup for the right eye, and the 1-month checkup for the left, and I am hopeful of more good news from the docs!

As always, SO many thanks to everyone who has been involved in this generous effort to help me thus far, and do stay tuned for more very shortly!

Hey guys, please do not post any new items until you hear from us as to the new totals...

Hey guys we are coming to the end of this round, more or less (HI AWESOME DEADPOOL SKETCH OMG)

We're up to almost $800 in this round. I have a pile of goodies earmarked for the February auction.... PLEASE, remember to help spread the word!!

---First, send paypal directly to emilyesse(at) gmail(dot) com as a GIFT.
---Then, either 1. Forward the receipt or 2. a screencap of the receipt to me at foresthouseeyes (at) yahoo (dot) com.
---MAKE SURE you notate which auction you are paying for with this donation. If it's more than one, please list them (no need to make individual donations - fee free to group, but make sure you note what it's for).
---Finally, make sure there is a valid email address that you actually check included with your email (if you don't check the one you use for paypal, like me).
---I will post in the auction thread that the auction is paid.
---Please contact each other via DM or email to work out details.

Hey everyone! One of my favorite comic book (and Deadpool) artists, the awesome Reilly Brown (@Reilly_Brown on Twitter), has been kind enough to donate a sketch to the auction, but doesn't have a LiveJournal; so I'm posting this for him:

Deadpool sketch by Deadpool artist and writer Reilly Brown, best known for his work on Marvel's Cable & Deadpool series, and on New Warriors, Marvel Apes and Incredible Hercules and Prince of Power. Reilly has most recently been working on Amazing Spider-man and Marvel Adventures Superheroes. [Note: You can check out a lot of his work at his DeviantArt page.]

This is a stellar piece you wouldn't want to miss out on! 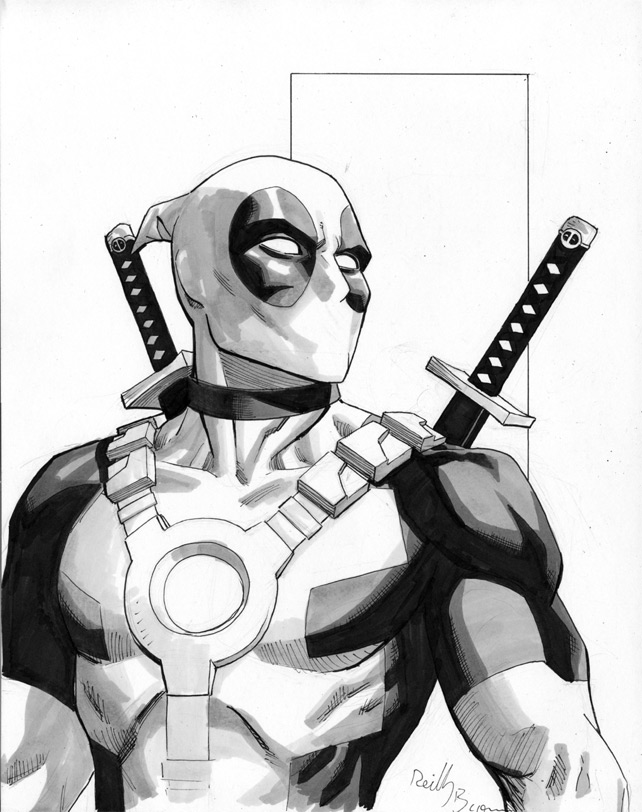 The piece is 11 x 14 inches, on Strathmore Bristol board.

Do you like tiny things, or beaded things Bid here. Also I didn't think of this before but I can add the tiny beaded things to other stuff, Like magnets.

I am offering two items for auction!

1) One (1) Baby Jayne hat-- it's a Jayne hat, except sized for a baby and made out of bright shades of comfy, washable cotton. Makes a great gift for your geek friends' babies! Here are a few pictures of happy babies in their hats: 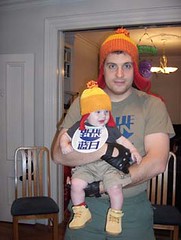 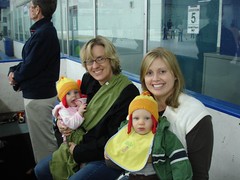 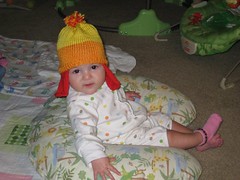 2) One (1) Pennyblossom hairclip, as seen in The Big Bang Theory episode 2x18, "The Work Song Nanocluster." My clips are as accurate as I can possibly make them to the ones on the Pennyblossom website that the show put up. Here's a close-up example, and what they look like in your hair, for scale: 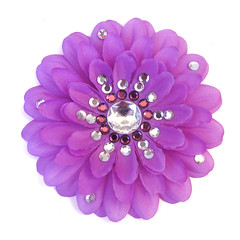 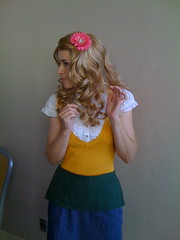 Many, many more pictures are available here.

You choose the flower color, rhinestone color, and clip style!
Flower colors: hot pink, pink, purple, yellow, red, white
Rhinestone colors: crystal, rose, amethyst, orange, yellow, red, or really anything you want (I have some other shades of pink and purple, plus some blues and greens)
Clip style: alligator clip or French barrette.

I will be posting another auction for the February end date for those who still want knitted goodies. I'm thinking of making it a 2-parter since there seem to be so many who want them...if you guys are willing to wait a little longer to get the goods, I can make more of them! And that in turn means Emily will have a little more cash to help her surgery fund.

Hello there! I'm new here, and I'll put these up for the January 15th auction.

1) A K-9 plushie made by me. Handsewn, felt and paint. Cat not included.
Starts at $15 postage paid by me 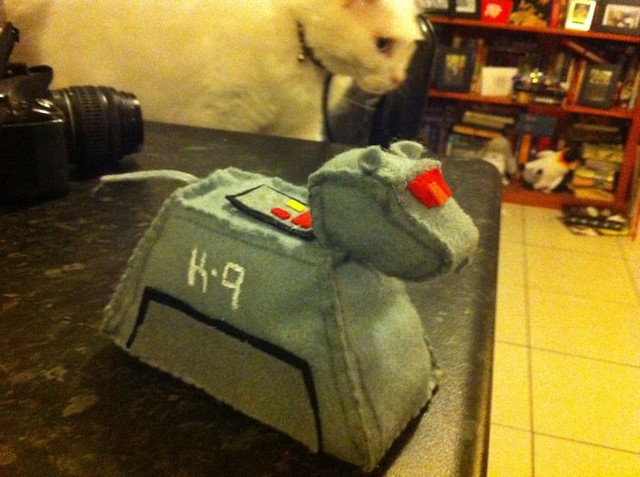 2) A TARDIS carry/computer bag. Fully lined with 2 interior pockets and button closure. Hand appliqued/painted TARDIS. Can be made to measure for your laptop.
Starts at $15 postage paid by me 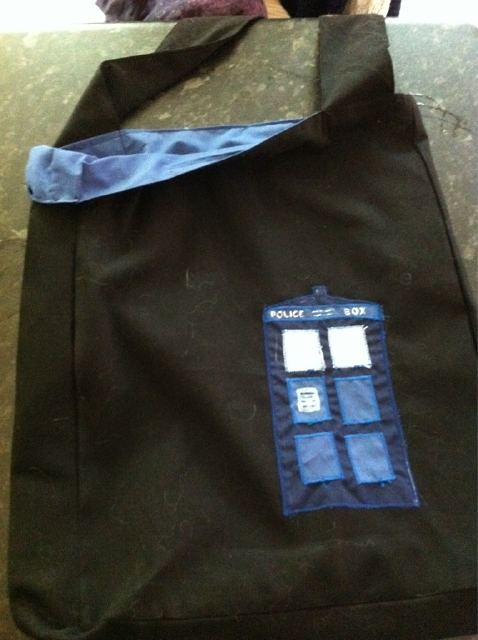 3) A care package from Australia. Yes, Australia. With local candy, postcards, plush aussie animal toy and other surprises! Will fit 1 kilo worth of stuff into a box and send.
Starts at $20 postage paid by me

We are not getting a whole lot of traffic through here right now. We've got less than 20 items in the January sale, and about $300 worth of bids - that's not much, considering. I'd love to ge a few more items posted on Monday if possible, but more to the point there's lots of items with NO BIDS or only one bid, and some super awesome items going for UNHEARD OF prices...

So please! Link to the auctions on your LJs and Facebooks. Huge Dr Who fan? we've got books, scarves, and dolls - tell your friends.

And as always, you can follow directions in the user profile to donate directly. Forest house has almost $6500 in bills to pay for this surgery. Save the eyes!
Collapse